"The Fate of Food Influencers on Instagram" by Deesha Menon 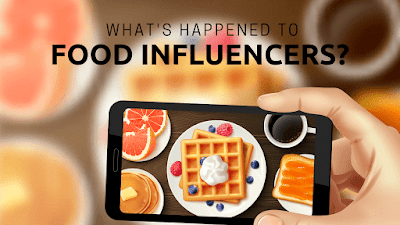 Brad Lau, more commonly known by his handle @ladyironchef, was supposedly the second most popular food influencer on Instagram in 2017, only second to Jamie Oliver. This is both surprising — who would’ve thought a food influencer from a tiny island like Singapore would emerge second in the world? But at the same time also unsurprising — food is what we’re famous for, after all. Singaporeans know how to eat.
Lau has been around for as long as I’ve been on Instagram and probably even before. I remember wondering if he was a woman, because of the word ‘lady’ in his handle. I relied a lot on his articles and reviews to decide where my sister and I should cafe-hop (back when we had the time and expenses to do this), as I am sure a lot of Singaporeans did too. In an era when sponsorship wasn’t too common and people were still using Instagram filters on their images, Lau rose very quickly and admirably to popularity.

But where does ladyironchef stand today?

This chart shows us that Lau’s audience has actually been steadily decreasing since March 2016. People seem to be less and less interested with Lau’s content, despite the fact that he was one of our food influencing pioneers. I headed to his top performing post in 2018, which is this video of a Korean breakfast toast:


It is interesting to note that his caption does not contain any hashtags, which means he was not paid to post this video. Rather, it seems to be a more organic appreciation of toast.

“This is the best Korean breakfast toast in Seoul. Read more on http://www.ladyironchef.com/2018/07/egg-drop-seoul/“

Ladyironchef is also inimitably known for his blog articles. He’s written a review or listicle on almost every food item/place that he’s been to. Come to think of it, he’s actually doing everything right: videos (1 per day), follow-up articles, simple & readable captions. But the engagement on his images remains low.

He stands at an average of 0.3% which is much lower than the average engagement rate of 2.7% for accounts in Singapore with more than 500K followers.
I love ladyironchef, but perhaps he is just not what foodies want anymore.

So, who’s taken over?

I had to explore beyond the region to find out who our top food influencers are today. To do so, I ran the hashtags #foodinfluencer and #thediningadvisor through our platform to find posts which also contained the hashtags #ad and/or #spon. Then I narrowed the search to the top 3 accounts that (1) stood out to me, and (2) are handled by people (i.e. not restaurants or agencies). I came up with @glutenfreegalpal, @_federicagenovese, and @jimmyfoodtron.
Let’s take a closer look at each of these accounts.
I began with Genovese, who is an Italian food blogger and food critic. It is interesting that the title ‘food blogger’ should be in English while ‘food critic’ remains in Italian, untranslated. This could possibly point toward the fact that her identity as a food blogger is something she wants recognized internationally — after all, food is a universal language. Genovese’s top performing post of this year is a beautiful picture of cannelloni:


The engagement rate on this post was double her usual engagement rate. A quick scroll of Genovese’s account shows us numerous well-taken pictures of (mostly) Italian food. It’s no wonder 21K people follow this account. The next time you’re looking for a bite in Italy, you know where to find a good recommendation.

Genovese’s follower count also has been steadily increasing from end 2017 till now, at incremental rates of 2-7%. While it is natural that 60% of her followers are based in Italy, she also has a sizeable following from the U.S. and U.K.
Next I looked at Jimmy, who has 19.4K followers in total. This food influencer is from Los Angeles which explains why most of his followers are based in America, but this is followed closely by Italy, actually. Italians really love their food too. Jimmy has got an immensely colourful feed. American food is generally carb and cheese heavy, but he manages to make every burger and sandwich look captivating with bright colours and high definition images.
Take a look at his top performing post from this year:


Tell me you don’t want to reach into your phone and grab that.
Jimmy is fairly new to the food influencer game. He grew quickly in the last quarter of 2018, with an average 25% growth rate.

His growth rate has steadily increased since, though he does seem to suffer from a decreasing engagement rate.

This was surprising to me because Jimmy plays by all the rules of an ideal Instagram influencer. He has witty captions, eye-catching photos, an adequate number of videos, uses the Instagram Story and highlight function, and enlists giveaways for his followers. I’m not sure why people are disengaging, but either way, here is another scrumptious picture for good measure.


The last food influencer I looked at was Arielle, who goes by the moniker @glutenfreegalpal. As her name suggests, she recommends gluten-free eats for those who are slightly more conscious about their food choices.

Arielle has 17K followers, and although that is the least of the three, her follower rate increased rapidly in early 2019 as evident from the graph.

She clearly became a lot more popular this year.
Arielle’s top performing post also outperformed both Genovese and Jimmy. Here it is:

While these food influencers are doing fairly well for themselves, it seems like people don’t engage with them as much as they do with beauty or health influencers. This might be why influencer marketing hasn’t taken to the food industry as much as beauty, cosmetics, and fashion. Personally I wouldn’t have known this if I didn’t take a look at the metrics — I always assumed there was a market for everyone. Even though all of them abide by the ‘influencer rulebook’ and are forerunners in their industry, they are falling behind other personalities in terms of follower and engagement rate. I am not very much of a foodie myself; I enjoy eating but I avoid spending money on cafes and restaurants, which explains why I don’t follow any food influencers.
Society is definitely changing how they spend their money. Is home-cooking becoming the case? It could very well be.