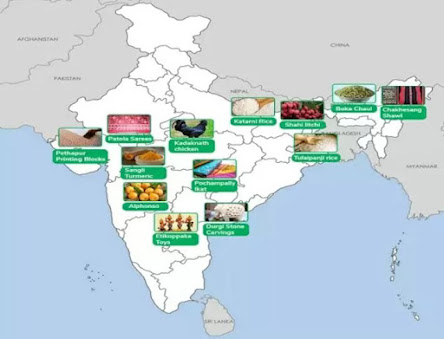 Several products that we come across in our everyday lives, like Darjeeling tea, Scotch Whisky, Swiss Gruyere cheese etc. are associated with some geographical region that acts as a source of origin for these goods; thereby authenticating the quality of the goods.

Geographical Indications (GI) is one of the six Trade-Related Intellectual Property Rights (TRIPS) of the World Trade Organization (WTO) that enable comprehensive and effective protection to goods registered as GI goods.[1]

WHAT IS MEANT BY ‘GEOGRAPHICAL INDICATIONS’?

Article 22 of the TRIPS Agreements defines Geographical Indication as "indications which identify a good as originating in the territory of a Member, or a region or locality in that territory, where a given quality, reputation or other characteristic of the good is essentially attributable to its geographical origin".1

In simpler words, a GI tag is a proof of where the product is born or produced. Such a tag acts as a signalling device that helps producers to differentiate their products from competing products in the market on the basis of place of origin and enables them to build reputation and goodwill around their products, as a result of which the goods fetch a premium price.

A comparative analysis between two types of Intellectual Property – trademarks and GIs, shall help understanding the basis of GIs. A trademark is a sign used by an enterprise in order to distinguish its goods and services from those of others and in turn gives its owner the right to exclude others from using the same. Similarly, a geographical indication acts as a source of origin and has certain characteristics that exist due to the geographical location. However, it is pertinent to note that a geographical indication is not an individual property for use only by the owner but instead a public property, and allows every producer in the specified region to use the said GI as long as the superior quality of the GI goods is attributable to the said region.

Apart from acting as a source identifier, a GI performs other functions as well. Some of the said functions are as follows:

iv) Boosting the economy as a result of increase in exports: GIs promote economic prosperity by boosting exports as there is a higher demand for goods with GI tags since they let consumers know that the goods come from an area where a given quality, reputation or other characteristic of the goods is essentially attributable to their geographic origin.

India has a diverse landscape, an extensive rural network and several indigenous goods in the form of handicrafts (Kani Shawl, Bastar Iron Craft) as well as local produce (Nashik Grapes, Mizo Chilly). As a result of being richly endowed with natural and agricultural products, effective protection for GIs was of extreme importance for India.

Thus, in view of the above and in compliance with the TRIPS Agreement of the WTO, 'The Geographical Indications of Goods (Registration and Protection) Act, 1999 (GI Act, 1999) came into force to provide protection to the goods registered under the Act.

The object of the Geographical Indications of Goods (Registration and Protection) Act, 1999, is threefold,

1. By specific law governing the geographical indication of goods in the country which could adequately protect the interest of producers of such goods,

2. To exclude unauthorized persons from misusing geographical indications and to protect consumers from deception and,

A striking feature of Indian GIs is the broad variety of product categories which they cater to. The list ranges from agricultural and horticultural products to textiles, handicrafts, paintings and beverages, among other things.

As per Section 11(a) of the GI Act, 1999[4], an application for registration can be made in writing with the Registrar by an association of persons or producers or any organization or authority established by or under any law, provided the same is in the interest of the producers of the concerned goods.

In order to strengthen GI protection, India submitted two proposals at WTO on Intellectual Property Rights issues covering geographical indications. Additionally, India along with Cuba, Egypt, Indonesia and Pakistan also submitted a joint proposal requesting the additional protection given to wines and spirits, to be extended to  other products  as  well. In the Indian context, this shall help export of agricultural and indigenous products like Basmati rice, Darjeeling tea, alphonso mangoes, which are in abundance in India.

Further, in another recent matter, the mark ‘KASHMIR’, applied for in respect of furniture, has been accepted by the Romanian IP Office (OSIM). Not only is KASHMIR a commonly known place, but also is closely associated and well-known with various handicrafts, including wooden furniture.

Out of 370 registered GI names on the Indian GI Register, approximately 60% are for handicrafts and in view of the same, one of the issues pertinent for India is the protection of its handicrafts in the European Union, as the European Union has no laws to protect non-agricultural goods under its GI laws.

In view of the above, a GI conveys an assurance of quality and distinctiveness, which is an outcome of its place of origin. Further, in today’s globalized world, a GI guards the local culture and tradition from being exploited by outsiders using the GI in order to mislead the customers into believing that the said goods belong to a particular region and thus possess the distinctive quality.

As is mentioned in ‘Embedding Local Places in Global Spaces: Geographical Indications as a Territorial Development Strategy (2010)’, GI status is very unique in the sense that it provides ‘a means of ensuring that control over production and sales of a product stays within a local area, but at the same time [it] makes use of extra local [foreign] markets’.

Chadha & Chadha Intellectual Property Law Firm - Avanee Tewari
[1] WTO, 2004
[2] Geographical Indications of Goods (Registration and Protection) Act, 1999
[3] Section 2 (e): "geographical indication", in relation to goods, means an indication which identifies such goods as agricultural goods, natural goods or manufactured goods as originating, or manufactured in the territory of a country, or a region or locality in that territory, where a given quality, reputation or other characteristic of such goods is essentially attributable to its geographical origin and in case where such goods are manufactured goods one of the activities of either the production or of processing or preparation of the goods concerned takes place in such territory, region or locality, as the case may be.
[4] Section 11. Application for Registration - (1) Any association of persons or producers or any organization or authority established by or under any law for the time being in force representing the interest of the producers of the concerned goods, who are desirous of registering a geographical indication in relation to such goods shall apply in writing to the Registrar in such form and in such manner and accompanied by such fees as may be prescribed for the registration of the geographical indication.
Publié par gentilesse de CEEUDECO à 8:42:00 AM