EU: Where do we stand on nutrition and health claims? 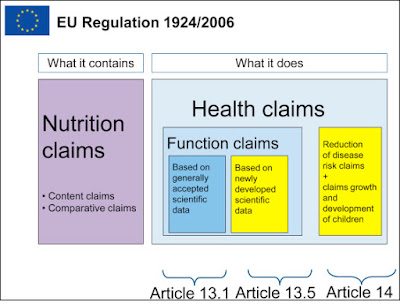 Fifteen years ago, products on sale in the European market could bear nutrition claims such as “90% fat free”, while, generally, no health claims related to human disease were permitted on the labels. Now, both nutrition and health claims are highly regulated and only those authorized can be used in relation to most food.
In 2003, the Commissioner David Byrne explained that a new regulation was needed for the consumer to “receive accurate and meaningful information while food producers will be able to use serious and scientifically substantiated claims as a marketing tool without being drowned out by the many unsubstantiated and inaccurate claims that currently exist on the market.”
After three years of negotiations, Regulation (EC) n°1924/2006 on nutrition and health claims made on foods (the NHCR) was adopted. It aimed to ensure the effective functioning of the internal market whilst providing a high level of consumer protection.
But the entry into force of the NHCR did not fully correct a the numerous discrepancies both in the definition of the terms used and the conditions warranting the use of claims. It was left to the Court of Justice to clarify the provisions and scope of this regulation.
The NHCR applies to “nutrition and health claims made in commercial communications, whether in the labelling, presentation or advertising of foods to be delivered as such to the final consumer”. The regulation does not define the term “commercial communication” nor does it clarify the meaning of “delivered as such to the final consumer”.
In 2016, the Court of Justice got the chance to clarify whether communication exclusively addressed to health professionals falls within the scope of the NHCR. The Court concluded that a nutrition or health claim aimed at promoting a food to be delivered as such to the final consumer, even though, for instance, only mentioned in a commercial communication addressed to health professional, will fall within the scope of the NHCR and therefore will have to comply with the pertaining requirements. The Court also clarified that the concept of a ‘commercial communication’ must be understood as covering, inter alia, a communication made in the form of food advertising, designed to promote, directly or indirectly, those foods.
Today, most of questions regarding the scope of the NHCR have been answered. But some shadows areas persist. Perhaps the biggest of them all being whether the NHCR remains “fit for purpose”.
Facing the boom of the clean label trend and the shift toward natural solutions, the long-awaited outcome of the reevaluation of the NHCR (REFIT) could revive interest in a regulation that has not yet delivered all its promises. Future will tell if still waters run deep.
Katia Merten-Lentz
This article was first published by Food Navigator on November 7, 2019.