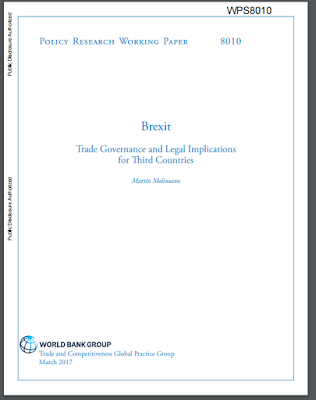 While precise impact of Brexit on the EU/UK trade and investment agreements with third countries will depend primarily on the terms of the withdrawal agreement to be concluded between them, most scenarios suggest an extensive process of amendment of the text and/or commitments in multilateral and bilateral agreements. At the multilateral level, the UK will remain a WTO Member, but will no longer be represented by the EU. The separation of the UK obligations from the current EU lists of concessions and schedules of commitments will require amendments that, particularly regarding subsidies and quotas, may lead to a broader renegotiation process requiring consensus of all interested WTO members. At the bilateral level, the status of current EU PTAs with regard to the UK and its trading partners remains uncertain: Some elements suggest that these PTAs may no longer be valid for the UK, or that, even if legally valid, they will no longer cover the relationship between the UK and the third country. Further, EU agreements focusing on goods only will no longer apply to the UK. For these agreements to continue to apply, the UK and the third country will need to amend some aspects of the text of the agreement as well as of the lists of commitments. Investment treaties concluded by the UK with third countries will remain valid, and no amendment is in principle necessary. Parties could require amendments to the text of the treaty, due to a fundamental change in circumstances. LDCs and developing countries who benefit from the EU GSP will continue under this regime for the remaining EU member, but that GSP framework will no longer be applicable to the UK.
[...]See more at: https://openknowledge.worldbank.org/bitstream/handle/10986/26351/WPS8010.pdf?sequence=1&isAllowed=y